Hoodlums early this morning attacked the National Headquarters(Dikko Inde House) of the Association Nigerian licensed Customs Agents (ANLCA).The hoodlums numbering more than twenty,  suspected to have been sponsored by detractors of the National President Hon. Iju Tony Nwabunike armed with iron rods and brandishing all manner of dangerous weapons  vandalized and tore down everything in sight, sending panic wave at workers and early callers at the erstwhile quiet Secretariat.
Findings by our reporters revealed that members of the  Association of Igbo Maritime Practitioners in Nigeria, ASIMPIN, had slated a solidarity visit to the National President of ANLCA, Hon. Iju Tony Nwabunike for this day.
This solidarity visit  was however aborted as the hoodlums rampaged with lethal weapons invading the Secretariat smashing window louvers and destroying whatever they could lay their hands on.
It was not readily ascertained if there were casualties as those around the Secretariat scampered for safety at the sight of this rampaging miscreants.
As at the time of this report, phone calls to the national president, Hon. Iju Tony Nwabunike were yet to be answered.

Meanwhile confirmation from our Sources say the destruction was  allegedly carried out by the ANLCA Western Zone, Task Force .Four AK47, 2 Pistols  and a big bag of Charm was discovered from them by police. 10 suspects have been arrested by the police. They also broke into the General Secretary’s Office and packed all the files, which they burnt at the entrance gate of the Secretariat. 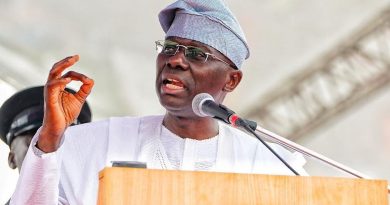