Everything is now set for the conclusion of elections into the various chapters of the National Association of Government Approved Freight Forwarders (NAGAFF) with the screening of contestants and voters slated for next week in Lagos.

This indication came from the Chairman, NAGAFF Electoral Commission (NECOM), Engr. Chukwunonso Ejikeme, in a chat with our correspondent Thursday in his Apapa office.

He disclosed that from today, July 8, 2022, NECOM would commence the collation of the registers of voters and those of the contestants in all the chapters in preparation for the screening exercise next week.

Engr. Ejikeme, confirming that everything was going on as planned, however said there was a minor adjustment in the election timetable as the exercise would now commence on August 11 with the Apapa chapter as against the earlier date of August 2, 2022.

In his words, “We are making progress with everything going on as planned. The cooperation of all stakeholders has been wonderful.

“From tomorrow, Friday, we will begin the collation of all the voters’ registers in all the chapters to pave the way for the screening exercise that will begin next week. The screening will involve both the voters and the candidates”. 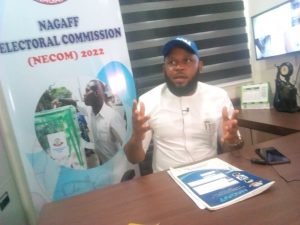 Ejikeme, who is a board member of the Council for the Regulation of Freight Forwarding in Nigeria (CRFFN), reiterated his pledge to deliver a credible and transparent election to NAGAFF.

He disclosed that the painstaking screening was meant to ensure that only qualified professionals were made to be on the driving seats of all NAGAFF affairs, as according to him, there should be no room for quacks and touts.

“We are going to do the screening to ensure that only the professionals in the freight forwarding business who are true members of NAGAFF get elected to occupy offices in our association.

“There is no room for quacks or touts in this election. Remember, I promised to deliver not just a credible election to NAGAFF but a transparent one.

“Before we flagged off the election, we released the guidelines which is all encompassing. As NECOM, we are following the guidelines to the letter. This is why we will ensure that all the candidates meet the requisite qualifications in line with the laid down rules”, the NECOM boss said.

Ejikeme expressed his delight at the massive turnout of both contestants and voters towards the election process, describing the show of interest by the association’s members as unprecedented.

He expressed the Commission’s gratitude to the Founder of NAGAFF, Dr. Boniface Aniebonam and the National President, Chief Tochukwu Ezisi, whom he said had empowered the electoral body to do its work unfettered.

“I want to thank the Founder and the National President for all their support and giving us the free-hand to carry out our assignment. As I speak, the Commission is lacking nothing in the execution of its assignment.

“In return, I promise to deliver as I stated at the inauguration day, we will give NAGAFF a credible and transparent election”, Ejikeme said.

The youthful NECOM Chairman announced that after the collation and screening exercise, the Register of Voters and names of contestants would be displayed for public view in case of complaints and observations before the elections proper.

The engineer turned business man observed that he had not seen much of campaigns and engagements going on in the buildup to the election. He however attributed the lull to the uncertainty that usually pervades the air before the emergence cleared candidates in an election.

He expressed optimism of seeing a robust campaign and political engagements after the screening exercises.

Recall that on June 3, 2022, the electoral body lifted the ban on electioneering in the association and accordingly released the guidelines for the exercise.

All elections are scheduled to take place at the Apapa GRA headquarters of NAGAFF in Lagos.