His sack was contained in a letter addressed to the former President and signed by the Chairman, Board of Trustees (BOT), Mr. Chidiebere Enelama.

The letter titled, “Notice for the Dissolution of the National Executive Committee” was dated September 30, 2021. 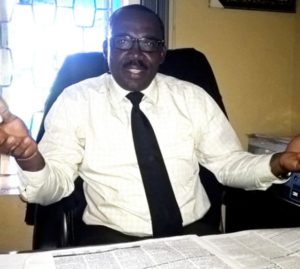 The letter stated, “I wish to use this medium to inform you of the dissolution of the National Executive Committee (NECOM), which you preside over with effect from 30th October 2021”.

“The decision to dissolve the NECOM followed a resolution passed during the meeting of the National Executive Council (NEC) of Thursday, October 30, 2021, at the Conference Room, National Headquarters”, it added.

According to Mr. Enelama, the resolution to relieve the president and his exco of their posts was as a result of their four-year tenure expiration, which he noted, would elapse on October 30, 2021.

The BOT Chairman as a result directed the former President to hand over all the association’s documents, property and belongings to the BOT.

However, keen observers of NAGAFF politics are not surprised at the sack of Chief Uche by the management as there has been an uneasy calm in the group in recent times.

The last straw that broke the camel’s back was the alleged attempt by Uche to contest the Governing Council election into the Council for the Regulation of Freight Forwarding in Nigeria (CRFFN) on the platform of another association.

The former NAGAFF boss was said to have pitched tent with AFFPLON, an unregistered group by CRFFN, as its candidate for the election. Recall that Increase Uche served in the recently dissolved Governing Council of the CRFFN.

A frontline member of NAGAFF told Seabreeze News that what has surprised members of the association was that the former President kept mom at a recent general meeting of the group specifically held for people to declare their interest in the CRFFN election.

However, it was gathered that Uche failed to declare his intentions to contest, apparently realising that such a move would not scale through as the association’s high command was said to be unhappy with his representation of the group at the Council.

According to sources, he was alleged to have kept the House in the dark as to the goings-on in the Abuja domiciled body.

Already, Chief Tochukwu Ezisi, a frontline wealthy member of the group has been chosen to replace Chief Uche.