It was celebration for the Nigerian Navy as its survey ship, the NNS LANA, with the call A498 resurrected in French shipyard OCEA which launched a new hydrographic research vessel for the force.

Based on the OCEA OSV 190 SC-WB design, the new vessel with the call sign A499, was named NNS LANA, a name which gave several naval personnel a sense of nostalgia, remembering the first survey vessel ever owned by the Nigerian Navy which was decommissioned 10 years ago. The Nigerian Ambassador to France Modupe Irele, a delegation from the Nigerian Navy Headquarters from Abuja and representatives the French administrations were present at the ship launching ceremony at the OCEA shipyard in Les Sables d’Olonne.’

The Nigerian Navy selected OCEA in 2018 to carry out this contract, following an international call for tenders for the acquisition of a hydrographic research vessel and associated logistical support services.
Speaking at the ceremony at the OCEA shipyard, the Chief of the Naval Staff, Vice Admiral Ibok-Ete Ibas, Who was represented by Rear Admiral Abraham Adaji informed that the new vessel was conceived as a replacement for the Nigerian Navy survey vessel, NNS LANA which was decommissioned about 10 years ago.

According to the CNS, the launching ceremony was a great significance as it marked a giant stride in the efforts towards actualizing the dreams of not only restoring but enhancing Nigerian Navy’s survey capability. He also emphasized that surveying and charting play a crucial role in ensuring safe navigation as well as delivery of maritime security, hence, the new vessel will not only enhance the safety of Nigeria’s maritime environment but also serve as a critical component of deployment of naval power for enhanced maritime security in the Gulf of Guinea. While stating that the vessel will also play a critical role in protection of maritime resources and preservation of law and order at sea, thus contributing significantly to the promotion of global maritime commerce, the CNS specially thanked the President, Commander in Chief of the Federal Republic of Nigeria, President Muhammadu Buhari for his unflinching support to the recapitalization of the Nigerian Navy Fleet.

Earlier, Mr Fabrice Weinbach representing Mr Roland Joassard, the CEO of OCEA, said the “LANA” was the result of the excellent cooperation between the Nigerian Navy and OCEA teams and also thanked the Nigerian Embassy staff and the Nigerian Building survey team for their commitment and professionalism.

THE NEW NNS LANA BUILT BY THE OCEA SHIPYARD

He said that the new ship demonstrates the willingness of Nigeria to improve the knowledge of the country’s waters with a sea proven platform and up-to-date equipment. He also added that the OCEA and Nigerian Navy relations will be strengthened through the supply of integrated logistic support services, including training, to maintain the operational readiness of the crew, the ship “LANA” and her equipment and systems, and the on-site technical assistance.

According to the French shipyard, the award of this order has demonstrated the competitiveness of OCEA’s offer in the face of intense international competition. The shipyard said the building of the NNS LANA and completion also strengthens the presence of the OCEA Group in Nigeria, whose Navy already operates numerous patrol vessels from 24 to 35 meters built by OCEA.
Also speaking during the launch, Nigeria’s Ambassador to France, Mrs Modupe Enitan Irele highlighted the significance of the ceremony as a manifestation of good Nigeria – French relations. Construction of the new vessel started in 2018 and the vessel is scheduled to join the NN fleet in 2021. It revealed that by the end of 2020, the shipyard located in Vendée will deliver two 35-meter FPB 110 MKII type patrol boats and four interceptors to the Nigerian Navy.

The OCEA OSV 190 SC-WB is a hydrographic and oceanographic research vessel from OCEA’s line of auxiliary vessels.
The vessel designed by OCEA offers excellent operational capabilities thanks to optimized seakeeping, controlled integration of scientific systems and reduced impact on the observed environment: noise, radiation, as has been confirmed by SHOM and Kongsberg on the OSV 190 SC-WB “KRI RIGEL 933” and “KRI SPICA 934” operated by the Indonesian Navy.
NNS Lana according to the builders, will allow the Nigerian Navy to have a better knowledge of its maritime territory and its Exclusive Economic Zone: Coastal and deep sea scientific research and studies (hydrography, oceanography) Fishing control Surveillance of the Exclusive Economic Zone Assistance and supplies to other boats Helicopter winching operation Towing of ships.
To carry out its missions, the ship will be equipped with high-performance technical and scientific means, in particular: A deep water multibeam echosounder, A single beam depth-water sounder,  Side scan sonar, A current meter Means of sampling, storage and analysis of water, fish and sediment Laboratory hardware and software An 8 m hydrographic boat equipped for data surveys along the coasts in small and very shallow waters.

Tanker searched for drugs since August, nothing found, but search will go on 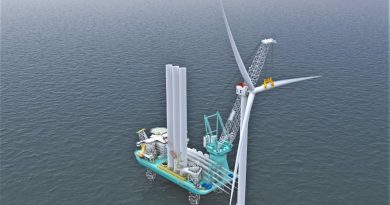