In the face of the proposed ban on use of fosil fuels by the developed countries, the Nigerian Maritime Administration and Safety Agency (NIMASA) has tasked the country to tap into the nation’s maritime potentials for economic survival.

The agency’s Director General, Dr. Bashir Jamoh gave the advice in a recent lecture he delivered at the National Defence College (NDC) in Abuja.

In the lecture titled, “Maritime Security and National Development in Nigeria: The Role of NIMASA”, Jamoh stated that maritime had enormous potential to drive sustainable development in Nigeria, with huge investment opportunities in shipbuilding and repairs, offshore/floating spare parts sales and maintenance, freshwater bunkering and supply, dredging, and inland waterways transportation. Added to this, he noted was the fact that about 75 per cent of all Gulf of Guinea-bound cargo were destined for Nigeria, saying if properly harnessed, maritime could give the country 30 times more than the revenue from oil.

Oil contributes about 70 per cent of government revenue and nearly 90 per cent of foreign exchange earnings in Nigeria. But Nigeria is trying to move away from the near total dependence on oil.

Jamoh stated, “Judging by a simple maritime resource mapping, and also research by reputable local and international organisations, it is clear that our marine environment can give us annually 30 times more than what we get from oil. There is boundless opportunity for investment in the sector, given the right conditions.”

The Director-General decried the effect of maritime security issues on Nigeria and enumerated steps taken by the country to tackle the problem.

These he said included the promotion of worthy maritime governance system, maritime infrastructure development, and investment in maritime security.

He said the fiscal and monetary interventions by government, recent arrangements for better management of the NIMASA modular floating dock, and stakeholder support systems were part of efforts to enthrone good governance in the sector. On security and infrastructure development, he highlighted the Integrated National Security and Waterways Protection Infrastructure, also called the Deep Blue Project, and the various fleet expansion and shipbuilding plans as measures to ensure a conducive environment for investment in the maritime industry.

“We are tackling the security issues in our waters, and we know that the international community is concerned, and the stakeholders are mindful of our efforts,” Jamoh said.

He explained that NIMASA, being the country’s Designated Authority (DA) for the implementation of maritime regulations, had taken steps to create the right atmosphere for investment in the maritime sector.

Jamoh identified the steps to include the Agency’s pivotal role in the recent intensification of collaboration and teamwork among maritime agencies; strengthening of cooperation between NIMASA and the security agencies, particularly, in the area of information sharing; establishment of a Maritime Intelligence Unit; proposed Maritime Security Strategy Document; the proposed Maritime Security Committee; and enactment of the Suppression of Piracy and Other Maritime Offences (SPOMO) Act 2019.

He commended the NIMASA Director-General for his efforts towards the growth of the maritime industry and intensification of the collaborative spirit among relevant organisations in the sector.

The occasion was for NDC Course 29 participants.

Over 14 countries and more than 20 cities around the world have proposed banning the sale of passenger vehicles powered by fossil fuels – petrol, liquefied petroleum gas, and diesel – at some point in the future. 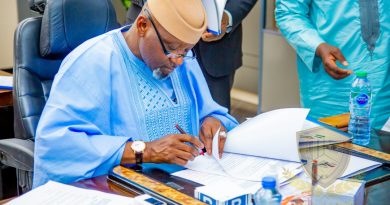