The Standards Organisation of Nigeria (SON) says the coming into effect of the African Continental Free Trade Agreement (AfCFTA) has thrown up a big challenge to Nigerian manufacturers to produce quality products.

Failure to meet this challenge, it says, would mean that other countries with better standard products will take over the market from Nigeria.

The Agency made the view known on Tuesday through its Director-General, Mallam Farouk Salim, in a chat with journalists at a one-day workshop it organized for media practitioners in Ikeja, Lagos.

Mallam Farouk said the challenge had also called SON to duty by ensuring that manufacturers lived up to the expectations of producing quality products that would meet international standard in the trade area.

“We now have the African Continental Free Trade Agreement otherwise called AfCFTA, which means if our manufacturers are not doing the right thing by producing quality products, other countries will take over the market.

“Therefore SON has the responsibility to ensure that goods produced here meet the standards required of them. Anybody who produces fake or substandard products will face the punishment as prescribed by law because of the harmful effects of such goods on the people and the society”, Mallam Farouk said.

He therefore pleaded with the media through its investigative attributes, to assist the Agency in the weighty task of ensuring that quality standards were met in products manufacturing in the country.

The SON boss urged the media to carry out its diligent findings on the system and that where they discovered anything untoward, the Agency should be alerted for interventions in the interest of the country.

“No country survives with a quiet media. Cut and paste journalism does not help the society and causes problem in the system. We need a vibrant press that that will constructively point out the ills in the society for them to be corrected”, he observed.

Farouk reiterated the Agency’s “responsibility of making sure that whatever comes into this country won’t harm our people. We have the best electric cables, lubricating oil, among many other products like that. Direct or indirect breaking of rules will be taken to court for prosecution”.

On his scorecard since assuming office, the Director-General disclosed that the first thing his administration did was to hire expert consultants who designed a roadmap for the Agency.

Thereafter, he added, they organized a retreat for staff in Calabar, Cross River State, where the roadmap was analyzed and synthesized for cause of action and that ever since, SON had remained on the path of success.

On a general note, the SON helmsman pleaded with media practitioners to tread with caution in the reportage of happenings in the country especially at these trying times of the nation’s history.

He noted that journalists were among the strongest and most influential in the society as their operations could make or mar any system.

In his words, “The importance of journalists cannot be over emphasized. They can analyse, criticize and amplify issues positively or negatively. What they portray is the way the society goes. That is why you have to be very careful with what you dish out to the society, especially at this critical period in the country’s history”.

Farouk recounted his recent experience after a visit to Rwanda, a country he described as very clean and beautiful with an almost a homogenous citizenry but had 10 per cent of its population wiped out by a bloody three months civil war.

He regretted that it was misinformation that led to that unwarranted bloodshed and warned that journalists should help by treading cautiously to avoid such a calamity in Nigeria.

“That is why you have to be very careful in what you write. One write-up can destroy a whole nation in a twinkle of an eye”, the renowned pharmacist cautioned. 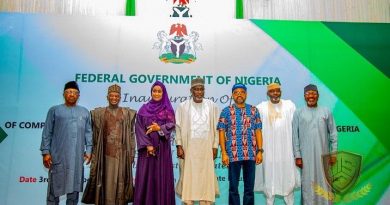